The Acetronic MPU 2000 was released in 1979 by Acetronic (duh) in the United Kingdom. It was technically compatible with Interton VC-4000 software, however the cartridge slots and cartridges were different for each machine so you couldn't take an Acetronic cart and plug it straight into an Interton machine. The Interton VC-4000 was quite popular in Europe at the time. 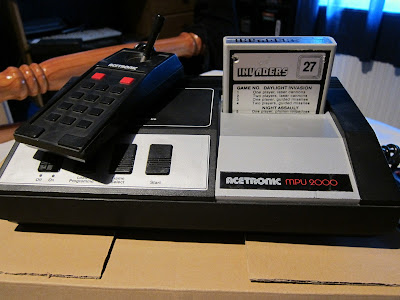 There is very little information available online about the Acetronic MPU 2000 so hopefully this review will give a little bit of insight to anyone looking to learn more about the machine. Unfortunately I only own 3 games: Invaders, Air/Sea Attack and Follow the leader/Electronic Music. Because of this, I will review the system and games in one go.

The system itself is fairly plain looking. There is a panel on the front with an On/Off switch and Load Programme, Game Select and Start buttons. The Load Programme button is needed because unlike most cartridge based consoles, the cartridge needs to be loaded into RAM before it can be played. This is quite unusual, the Interton VC-4000 family (as the Interton and similar machines like the Acetronic are known) are probably the only home consoles ever to have this feature. I say probably, because as I mentioned before the information available on these consoles is quite sparse and in places ambiguously worded.

The controllers are wired into the console, which is really annoying because you can't replace them easily. They are quite nice, however. The whole controller is a fairly chunky thing, but I think I have fairly average sized hands and it fits quite comfortably for me. 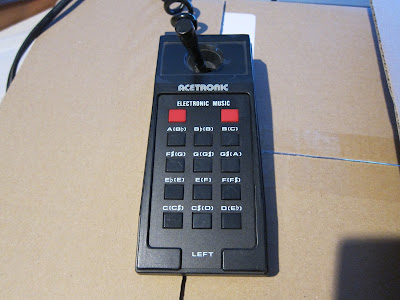 You have a large 360° analogue joystick which feels pretty smooth to move around, if a bit loose. That could be to do with the age though. You have two red fire buttons and also a 9 button keypad. I much prefer this keypad to the one on the Intellivision controller, as you have proper clicky buttons on the Acetronic instead of the crappy squishy ones on the Intellivision. Some games such as Electronic Music come with an overlay, in this case telling us which buttons supposedly correspond with each note.

The only big problem I have with the controllers are the cords. Why would anyone ever use a twirly cord? If the cord was straight, I could sit twice as far from the telly and I wouldn't keep accidentally pulling the console towards me. Harrumph!

The Acetronic cartridges are bulky compared to other cartridges from the era. Here's one next to an Atari 2600 cartridge for comparison:


The large '27' is the release number in the series of the massive library of 34 games available for this console. It took a while to find, but here is a full (I think) list of games compatible with the Acetronic MPU2000.


Games (I'll probably be comparing to Atari a lot, you've been warned)

First up is Invaders, or INVADERS as the cart says, but I didn't want to shout at you.
As you might have guessed, it's a Space Invaders clone. It's not the worst I've played but it's definitely not the best. One of the first things you'll notice is that the graphics are chunkier than the Atari 2600 version. Personally I actually think that these chunkier graphics have a bit of charm to them. Cute chubby barricades,  I just wanna squeeze those cheeks! 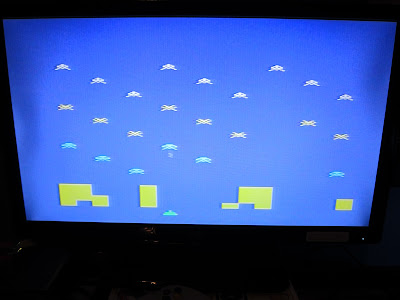 On the other hand, what is up with that formation? You're not going to invade anyone in diagonal lines, are you? Another peeve is that there is none of the classic "dun, dun, dun, dun, dun,dun,dun,dun" going on. More of just a 'bep,bep,bep,bep'. The shooting sounds are quite satisfying PEWs though, so it's all good.

The variant game types are also pretty uninteresting, not that I would expect anything mind blowing from an inferior Space Invaders clone. I do find it quite amusing how they doubled the number of 'games' on the cartridge by having 'Daylight Invasion' and 'Night Assault', which just switches the colours. 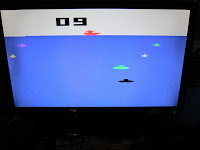 This one is very similar to Air-Sea Battle on the Atari 2600. Again, I think I might prefer the graphics on the Acetronic version. It didn't come out too well on the photos, but the Acetronic has really vivid colours, which is awesome. 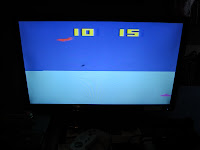 The gameplay, however, is worse than the Atari version. There are fewer game modes and it just isn't as much fun.
Having said that, it is a closer clone than Invaders was, and is a good substitute for Air-Sea Battle. If I didn't have an Atari, I would be perfectly happy playing this game.

This is the main reason I bought this system, I really like making noise with old equipment. The 'follow the leader' games are a sort of Simon/basic music tuition software hybrid. I could see this being a fairly useful tool for younger children back in the day, getting them to learn basic musical theory while also having fun.
The real gem lies in Electronic Music, however. Here is a clip of the built in tune 'When the Saints come marching in' to give you an idea of what it sounds like:


All in all, the Acetronic MPU2000 was an interesting copycat of various other home video consoles from the 70's. It's the little charms and oddities about this system that make me enjoy it. There's a reason it fell into the dark chasm of obscurity, though...

...Other than a little program that makes bleepy sounds, the games were just a bit crap.

Dusty Old Games
I'm Adam Asquith, a video game collector from South London, UK. In my spare time I write reviews of some of the more interesting, rare or under appreciated games that come into my possession, and post them here. If you enjoy this blog, like the Facebook page at: https://www.facebook.com/DustyOldGames